It is pretty difficult to grab a modern social media surfer’s attention to an advertisement, they are already immune to all kinds of posts that can be easily swiped away.
With regard to Out-of-home media – it is almost impossible to ignore a huge billboard which is set right in front of you, it is still going to grab attention and won’t be left unseen. It stands steadily and can’t be closed like regular internet ads. But being stuck out a mile is only one part of the success, campaign should also be memorable, exciting and creative like those events that people visited years ago but still remember.
In this post we are going to take a brief look at what are the most creative and eye-catching OoH media advertisements and make our top 10 list.

Pepsi’s “unbelievable” bus shelter was a digital OoH media project made in London. Augmented reality was developed through bus shelter’s display making it a realistic real-time window with thrilling scenarios, bringing sales for Pepsi Max up to 35%, reaching the auditory of 385 million people and winning over 20 awards. This advertisement for Pepsi Max is one of the best examples/cases of how can an ad for a product be made the way that it will be advertising itself.

02. “Workout Billboards” by Ogilvy for Powerade

Powerade took the approach – “Doing something once is better than seeing it a hundred times” and provided their billboards with training equipment, which included a pull-down bar, a scrolling climbing wall and a punching meter. All people were encouraged to stop by for an exercise and were offered to rehydrate themselves with a Powerade drink. Over the course of 3 weeks 54 000 people participated in their campaign and a documentary film about their approach reached millions online. 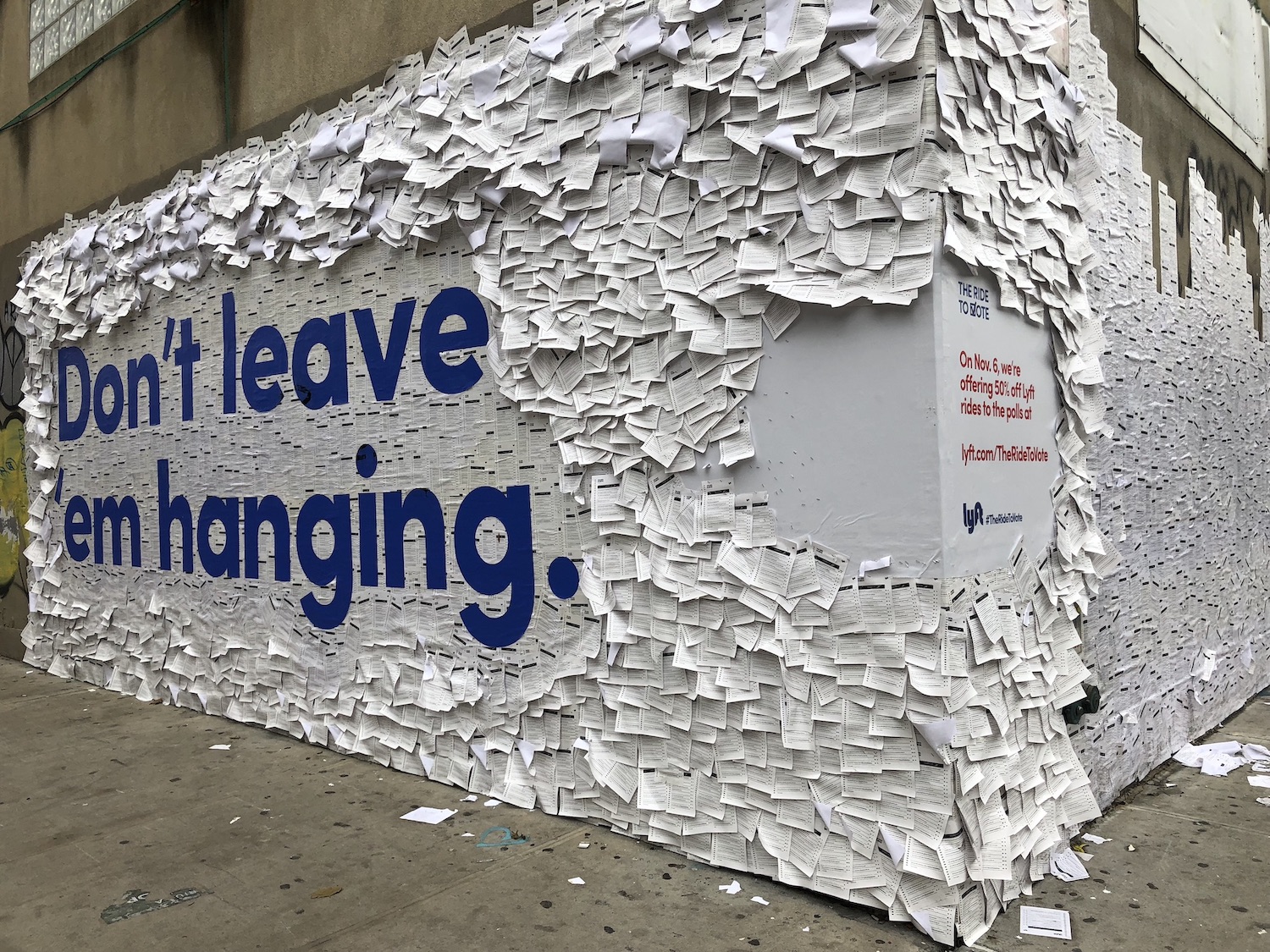 In the year of 2016 there was a problem with 15 million people being registered but didn’t have the ability to vote, because of transportation issues. Later, in 2018, Lyft brought a solution to this problem by offering free and discounted rides to the polls on election day. The poster is covered with millions of ballots which were left unconsidered representing the missed opportunity to vote. This is a great example/role model of how can OoH advertisement be made by bringing solution to a problem – doing, not talking.

04. “Probably The Best” by Fold7 and Mission Media for Carlsberg

“Probably the best poster in the world” Carlsbergs campaign is one of those examples, how less can be more. The world’s first ever beer serving poster with a minimalistic design and stack of glasses was serving a free Carlsberg coming right out of a tap. Coverage was gained in at least 8 popular social media publishers and magazines, in addition lots of fans all over the world.

“A breathing bus shelter” was a campaign by Netflix to promote their new sci-fi series “Altered Carbon”. Breathing people inside plastic packaging in LA bus shelters were so realistic that even by touching it people couldn’t be sure if it’s fake. The ad generated huge social and media coverage and can show us how using shocking campaigns, that creep the public out, can lead to going viral.

Excellent advertising campaign from IBM “People for smarter cities” took OoH media to the next level and did not limit themselves with a text poster. The idea of IBM project is to allow people to exchange their ideas on the city of tomorrow. Billboards were made in a way to provide not only intellectual or ideological value, passers by could also use it as a rain shelter, sitting spot or ramp to help them climb the stairs.

07. “Clean Air” by Lead Pencil Studio for  the US government

This empty billboard advertises nothing but a clean air. Simple but aggressive sculpture, commissioned by the federal government, showing the value of clean air. A great idea on how the surroundings could be used to advance a simple billboard and become outstanding. 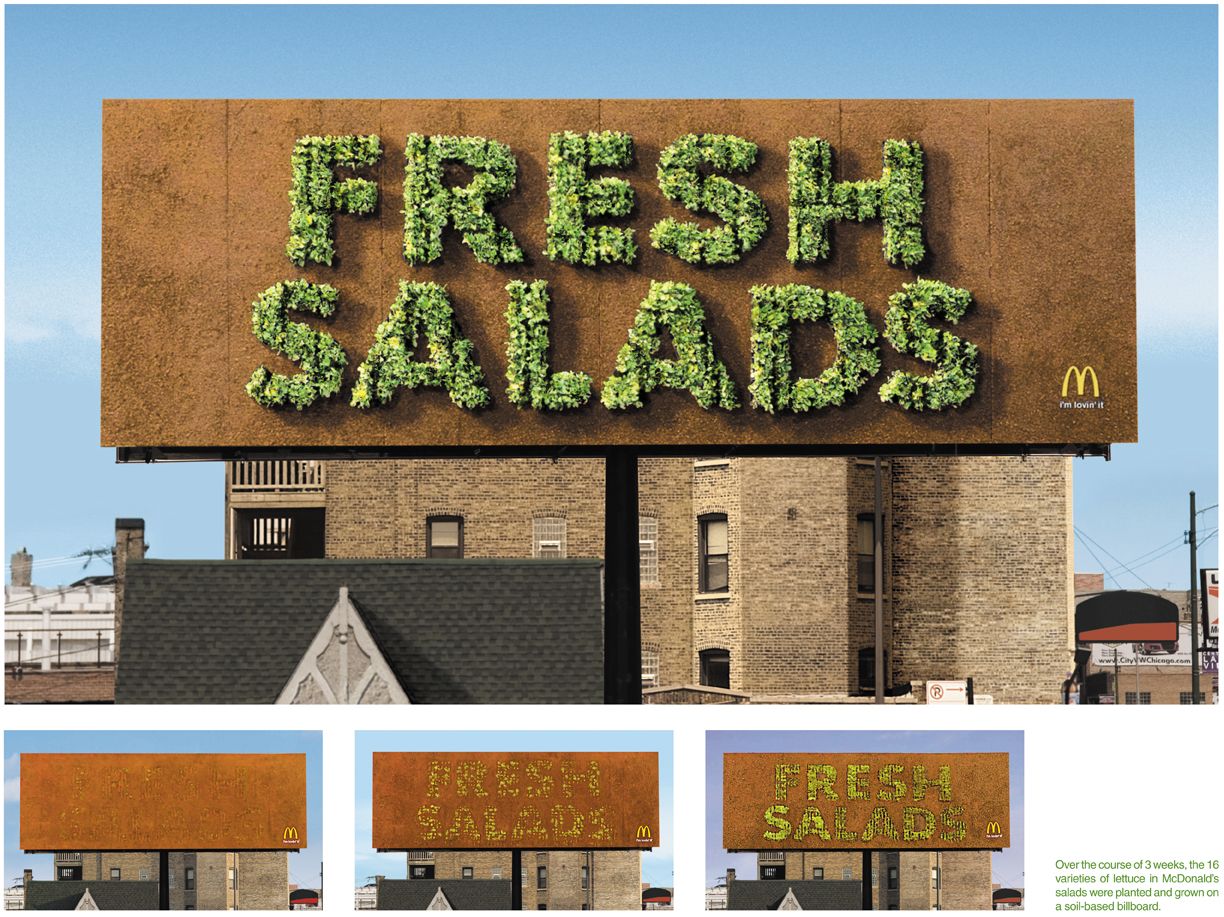 Over the course of several weeks 16 varieties of lettuce found in McDonald’s salads were planted and grown on the billboard to promote their fresh salads. Pretty impressive and original approach with a pinch of surprise in the end.

Seems like nothing unusual, just an unfinished billboard poster. But it is a curiosity factor that plays a role here, like when solving the crossword puzzle. Looking at this poster and wondering what could it promote, suddenly recognizing the famous KitKat’s slogan (“Have a break, have a KitKat”) and then the idea becomes complete with a thought in the head – “Huh, pretty clever”.

Google’s campaign for Ok Google, their voice search app, is represented on various surfaces from glass windows to bowling balls. The campaign is playfully encouraging people to ask Ok Google different intriguing questions and find out some interesting and unusual facts. It is not a huge poster in the most visited location, however, it still grabs attention, because the ad just feels so natural to the environment.